Our proposals for households hit by coronavirus

As it should be

“Only when the tide goes out do you discover who's been swimming naked.”

This quote from Warren Buffet is something I’ve been thinking about a lot since the start of the coronavirus crisis.

Customers who have tried to contact us recently may have noticed something strange: while other energy companies are issuing warnings to shareholders and refusing to answer the phones unless it’s an emergency, Octopus is operating better than ever.

Why? Because we created this business with customers at its heart, and we built the technology and the teams to allow us to serve all our customers brilliantly, even when the unexpected happens. We’re even licensing that technology to other companies who have seen it in action and want to be able to do the same - which is why E.On announced that they will use our platform for their 6 million Npower and E.On UK customers, and Hanwha Corporation of Korea are also licensing it in Australia.

But we’re not complacent. The measures the whole country needs to take to slow the spread of coronavirus mean that everyone is spending almost all their time at home, consuming more energy. And while for the majority that is an expense they can afford, a number are really struggling - especially if they’ve lost their job or their business. For them, being able to delay paying their energy bills until they are back on their feet could help get them through this time more easily.

We don’t believe anyone should have to choose between paying for energy and putting food on the table. It’s why we led the campaign for an energy price cap, and it’s why we have been campaigning for all households - including those who buy energy from our rivals - to be able to access payment holidays if they need them.

The government has put in place some great measures to help households and businesses affected by Covid-19. But as the recent Universal Credit numbers show, millions of people will fall between the cracks and suffer a dramatic drop in income.

We know from talking to our customers that some of them would find it really helpful if the government could help ensure they get a payment holiday (basically an interest free loan) on their energy bills, to help them through the crisis.

We believe that money should go directly to customers - not given to energy suppliers to decide what to do with it.

We believe every energy customer struggling as a result of coronavirus should be able to access support in the same way, no matter which energy supplier they happen to be with. It shouldn’t be a lottery.

That’s why we have proposed just that to the government and the energy industry. We’ve had lots of support, including companies like British Gas who added their name to the proposal, and buy-in from others like Bulb and Utility Warehouse. We’ve had some very positive conversations with ministers. And we believe the government is seriously considering doing something along these lines.

Energy company bailouts? No thanks.

An alternative way for the government to help out energy customers would be to do it indirectly - by providing bailout money to energy companies.

We don’t think that’s the best approach. If government money goes to suppliers instead of directly to customers, those companies can choose what they want to do with it. Some will decide to help out customers, but some will spend it on other things.

What Octopus will do for our customers:

As part of the scheme we have proposed, we created an application form which could be used as a standard. We’ve offered it to other energy suppliers so that it can be in place as quickly as possible and as fairly as possible - the same for all customers, regardless of which company they are with.

We’ll get a version of this live for our customers over the next week or so, so that we can start to deliver a transparent approach to customer support over this period. And we will continue to offer it to other companies so they can help their customers too.

Without the backing of a wider scheme, it won’t be as generous as we’d like - but it will be clear and fair. And if ever there is a scheme to help customers more widely, we’ll retrofit ours to improve the support level as applicable.

Thank you to the driver from @octopus_energy who just delivered my meds :-)

And of course, my brilliant colleagues will keep providing the same amazing service they always have - and they’ll do it from home. Those who can’t do their jobs from home, like our meter engineers, will be volunteering their time and our vans to support the NHS. And we’ll be backing all of them every step of the way (on 100% incomes, of course). 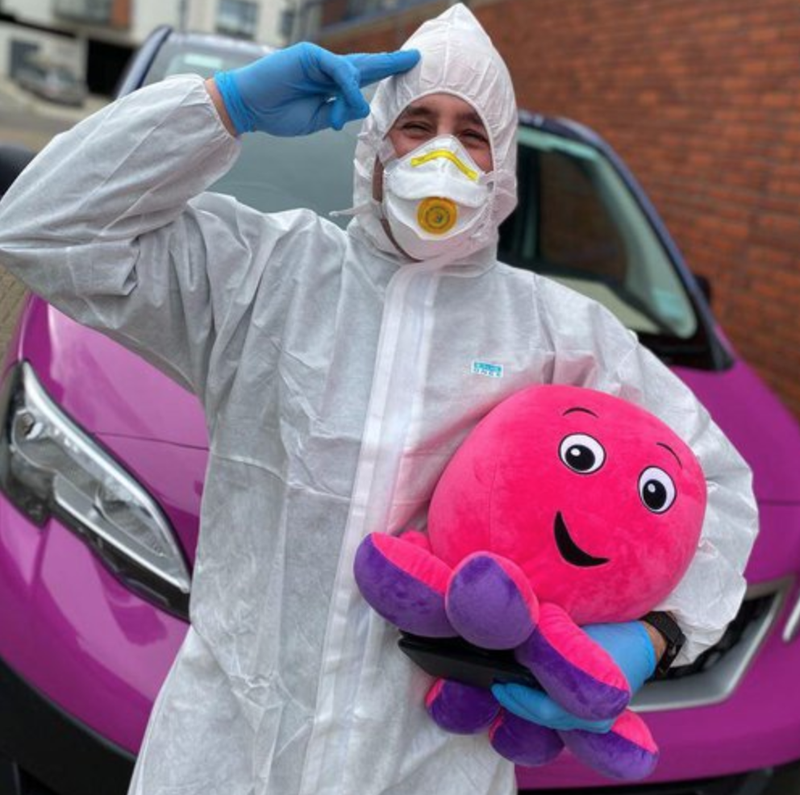 The news is full of stories about this virus bringing out the very worst in people, but also the very best. I’m sure we will always remember those people who stepped in to help their neighbours, those who behaved responsibly, those who were kind to others.

When this crisis comes to an end, I want Octopus to be remembered for keeping our phone lines open to all, helping our customers and colleagues through a hard time, and fighting for a fair deal for all households no matter who they chose as their supplier.

And all of our customers are part of this too - you can be proud that your energy company is doing the right thing by its team, its customers and society. When you signed up to Octopus you were part of doing business better - and I hope that during times of crisis we pass that test together.